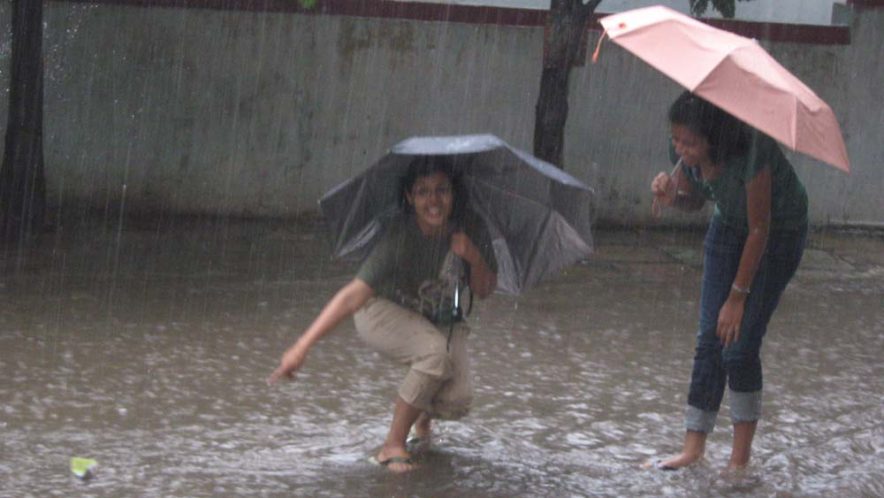 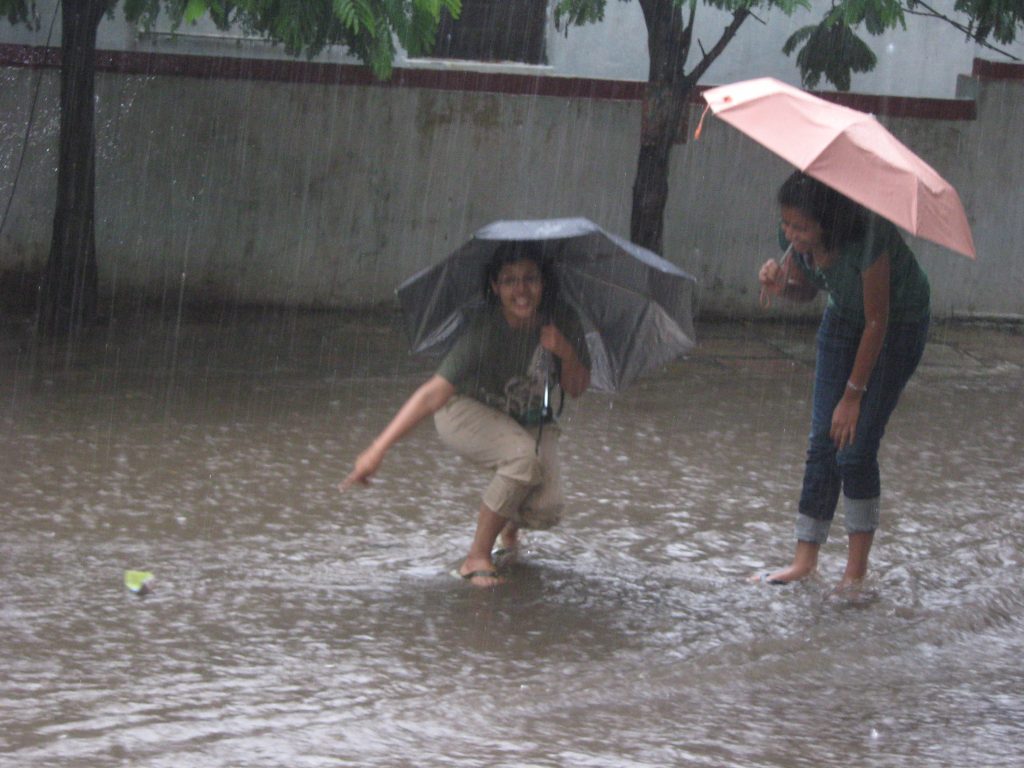 It’s the season that brings a whole upheaval of emotions. Great big drops fall from the saturated sky, at that breaking point beyond which the earth can’t hold back anymore. These are tears of happiness, of sadness, of anger, of release. Some of us run into the streets with abandon – they say the first rain of the monsoon washes away all your worries. Some of us crowd at windows and balconies to observe this phenomenon – one that has the capacity not only to create, produce and give, but also to disrupt, destroy and take away. Status updates are shared within seconds – those two magical words – ‘It’s raining!‘ Social media is filled with pictures of grey skylines, wet window panes and flooded streets.

I love the rains. For me, it’s symbolic of a crescendo of events which reaches its peak of concentration, before erupting and being diluted eventually into nothingness. It’s starting over.

I’ve been the person standing on the street, looking at the clouds in anticipation. I remember relishing each drop until they converged into a steady stream that soaked me to the bone. I’ve made paper boat after boat, racing them on the street’s rivers with family and friends. I’ve stood with dozens of others under bus stands, grumbling on the phone to various people about being ‘stuck’ in the rain but actually absolutely loving it. I’ve had bhutta from the bhutta-shop that would, like most Indian stalls, magically appear at the end of our street. I loved watching the coal burning black spots into the corn, that would soon be rubbed with lime and salt and that peculiar masala that never quite tasted the same when made at home. I’ve been on a two-wheeler (not fun at all) in a traffic jam, cursing the rain, cursing the traffic and cursing unexpected potholes. I’ve sat in autos, with my jeans slowly soaking up the water on the seat like a sponge. I’ve got doses of muck from cars as they drove past me through large muddy puddles. I’ve had chai-samosa with Amma in the balcony, laughing and making up stories about that uncle running with the plastic bag on his head, or that school boy chasing another down the street. We knew, once the rain started, that it would only be a matter of time before the power went off. The monkeys would all come out, swinging on the neem trees with their little ones and climbing up and down the pipes of our apartment. We’d light candles (because the emergency light would always be out of charge) and we’d stand at the door and chat with the neighbours. Power cuts brought everyone together, before people started installing back up generators. Power cuts were a time when we narrated stories, played 20 questions and found ways to pass time together, while the sound of the rain dulled into white noise in the background. And the food! Bajjis, bondas, vada paavs and other fried goodies made their way into our plates within minutes.

Every June/July called for a trip to the Western Ghats, where the southwest monsoon arrives first. There’s so much drama in these hills during the rains that it’s hard to keep track of what’s going on overhead and underfoot. The leeches and frogs are out and about, the canopy teems with life and even the smallest leaf is awake, dancing. The rivers rage in full force, and waterfalls burst with life as they tumble over the mountainsides with an explosion of joy. Kerala proudly displays a large amount of insects and Popy umbrellas, both of dazzling variety. The hills of Maharashtra take on a paddy-green colour, with streams and rivulets running onto the roads. In Bombay, romance is at its peak, and it drives the city out to its beaches in hordes. The Dudhsagar of Goa has travellers going into raptures as they are drenched in its spray while aboard the train that runs through it. In Karnataka, a whole world of treks await, the trails often lined with scaly animals. In the drier parts of India, parched land drinks in the water slowly, forming the warm brown colour of mud. In Kolkata, the yellow taxis form a sharp contrast to the grey overcast skies. In Meghalaya, it pours relentlessly, and the forest births waterfalls overnight. The Ganga is full, flowing and flourishing. Peacocks dance, farmers heave a sigh of relief – and the whole event becomes a poem from my 7th Grade Sanskrit textbook.

We’ve all been there. We’ve all revelled in the rains – one season that the country unanimously agrees is a time for celebration. The monsoon is like one gigantic living creature moving across India, morphing into various shapes as it crosses the country. Unpredictable, overwhelming, with the power to birth a new leaf as well as to uproot a tree, the impact it has on a country and her people is phenomenal.

It’s my first monsoon away from India and I never thought I’d miss it this much. But it’s not the rains that I miss – it rains almost every day here. What I miss is the heady mix of rain combined with the smell of earth, the samosas, the echoes in the apartment corridor, the infectious enthusiasm, the collective, widespread joy, and a balcony with a view.